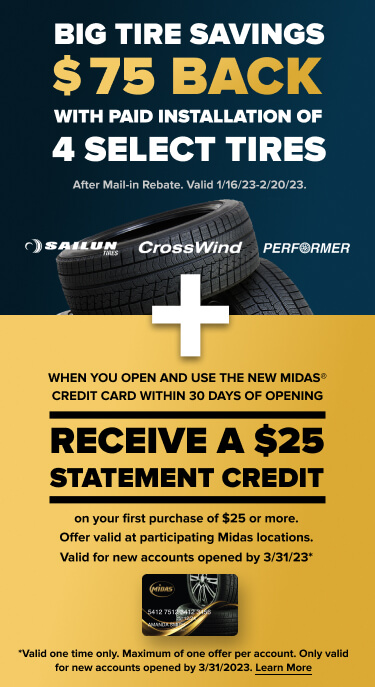 Most vehicles. Get up to $75 back on a set of 4 select Sailun, Crosswind or Performer tires with paid installation. Eligibility depends on tire size and model. TPMS reset not included, see store about possible extra charge. Discount based on regular non-discounted retail price. Disposal fee extra, where permitted. Shop fees additional, see store for details and applicability. Prices and fees may vary in HI/AK. Not valid with other offers. Coupon must be presented at time of service. No cash value. Void where prohibited. Valid at participating U.S. locations 1/16/2023 – 2/20/2023. 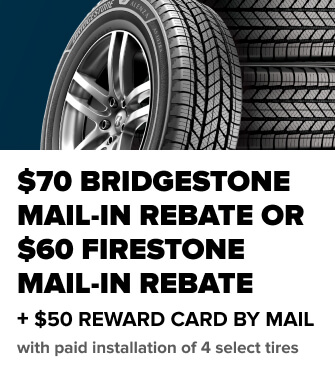 Most vehicles. See rebate forms for full details. Get $70 back on 4 select Bridgestone tires or $60 back on 4 select Firestone tires. Plus, get an additional $50 back by mail payable in the form of a prepaid card on the purchase of 4 select Bridgestone or Firestone tires. Eligibility depends on tire size and model. TPMS reset not included, see store about possible extra charge. Discount based on regular non discounted retail price. Disposal fee extra, where permitted. Shop fees additional, see store for details and applicability. Prices and fees may vary in HI/AK. Not valid with other offers. Coupon must be presented at time of service. No cash value. Void where prohibited. Valid at participating U.S. locations 2/01/2023 - 2/28/2023. 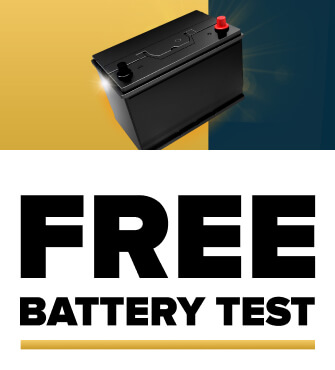 Most vehicles. See store for qualifying products. No charge unless services beyond battery check are approved. Shop fees additional, see store for details and applicability. Disposal fee extra, where permitted. Not valid with other offers. Coupon must be presented at time of service. No cash value. Void where prohibited. Fees may be higher in HI/AK. Valid at participating U.S. locations 1/01/2023 - 2/28/2023.

Midas dickson is your one-stop shop for brakes, oil changes, tires and all your auto repair needs. 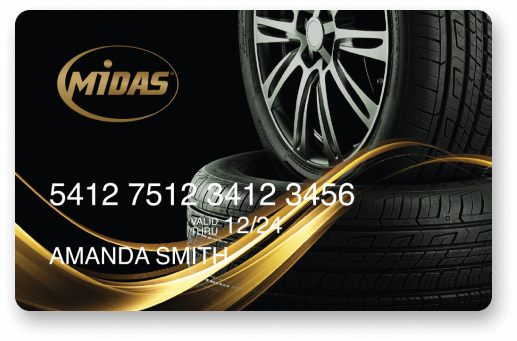 I was overall very satisfied with the service, employees, and performance. I know that Midas has been in business for many years. Maybe corporate should have this store's parking lot repaired.

Everything was done quickly & professionally, and the problem I came in with was solved.

The staff is EXCEPTIONAL! They make you feel like they are old friends. LOVE this location in Dickson, Tennessee!

Ray was very kind and mindful to me. I felt like family there.

I had never been to Midas before. I did not know Midas did anything other than mufflers. The service manager and the person who replaced my muffler did a competent and most friendly performance. I have recommended Midas already and will go back. I live in Hickman County Tn. Next to Dickson county where the work was performed. There are no muffler shops in Hickman, despite the fact our county is growing fast with 600 sq.mi. And a pop. Of 26,000.

My vehicle has intermittent problem. Your tech was truthful in that he couldn't determine the issue. No charge. Very honest.

Right at the front desk was extremely helpful! I believe his name was Jerry got my rotors and brakes done very quickly will definitely return!!!

Found a cracked Pch valve. It was replaced the Mgr wad so nice he went toPick it up.

"We initially stopped by for a quote on replacing my muffler, they gave us an estimate and offered to do the work that same day. They also kept us informed the entire time of longevity and job completion! Kudos to all of you. Trustworthy and profession"

You guys suck! After having to be towed back to your location due to a ?faulty part? the day before thanksgiving where their was oil leaking everywhere before you gave me my vehicle back! I was told by the district manager he would have my car detailed! H

"Not sure why everyone says this place is the best or that the manager is great. The only thing I have experienced is a very dirty environment where manager constantly throws cigarette butts on the parking lot, rudeness not only to customers and employees, "

"Midas in *******, TN charged double the amount other Midas would have charged. Also a few other places that were not Midas shops would of charged less. Why *******, TN Midas charged a lot more on prices don't know.Called customer service two times never g"

"I can't express into words what David, Robert and Dustin did to help our 22 year old daughter with the vehicle. Not only were they very professional, they were very honest! The biggest thing is these 3 men went above and beyond and stayed over an hour afte"

"Took work van to get the oil change, done it a few times, last time technician said the bolt in the pan was stripped. whenever I've been doing the oil change there for awhile, they didn't take responsibility for stripping the bolt saying the van was too ol"

Dave and the guys at Midas were extremely helpful and I could not have asked for better service.

Midas executed a faulty repair twice and caused additional damage to my vehicle and they refuse to provide a refund. I have 5 pages of notes about everything that has gone wrong over the two months I've been in discussion with Midas but here are the high p

"I have dealt with this Midas location before with a different vehicle, but that might be the last time. I called to get a quote on some tires while looking at their website which gave 24 results. He stated he only showed 1 tire brand in inventory and it co"

"Stopped to get an alignment and told the guy inside I know I need two new tires but rotate the back to front and the front to back( which were the ones needing replaced) and balance the ones that needed it, til I could afford to get 2 new ones later on. He"

Midas made a mistake on our vehicle after a big expense and a week in their shop. They would not stand behind their work but assured us all employees that made the mistake were gone. Not the answer we wanted to hear. I wouldn't even have given 1 Star bu

I went to the location to have my oil changed and tires rotated. I was there when they opened so I could get in and out as a business owner I had an extremely busy day. I was first in line to check in. The nice lady got me all checked in and then what appe

In and out fast with quality work.

"Starred off by leaving greasy finger prints all over my door then I noticed that my tires where not rotated, got home to notice that there was oil all over my driveway from the seal that was broke in half and wrinkled up. Changed oil and filter my self. Ow"

Y?all did a very good job I?m glad to to be y?all?s new customer

Overcharged and my vehicle is worse than issue I had going on only offered a complimentary oil change after waiting 6 hours in there lobby and having to return with my vehicle not fixed!! They are a joke. They will overcharge you and say that it's what it'

Best to not go to these midas locations. People read reviews before trusting. I had first hand witness to several customers returning within minutes after just leaving with problems. They say they are giving you a deal. Check around on pricing before you g

Excellent service they do everything

Everyone was very nice and helpful! You can tell they look for their customers best interest. Thank You ******* Midas Team!

Kyle is awesome and Derek is very friendly .

They were so kind to me and took really good care of me, I THANK GOD FOR THEM.WILL GO TO THEM ANYTIME.

They were great in and it in no time

"From Derrick the manager which trickles down to the techs... just a superb shop to have your vehicle's maintenance or repairs performed.Very friendly and affable group. Based on the work I had performed, my Drive back to Nashville is always much better tha"

Midas got me in and out and provided excellent service as expected.

"The people at this store are everything and the service is incredible. Shoutout to Derrick, Kyle, Tristan and Nick for their amazing service with my car. They were all so helpful in more ways than one and I couldn?t be more grateful to them. Will DEFINITEL"

They are great people.

"My car needed a lot more than just a little tlc, and Derek at Midas took care of everything for me. Him and his staff are amazing and more than friendly! If you need anything done, Midas is the place to go. Your welcome. ??"

They were amazing and affordable

Fantastic service!!! Will be back for sure :)

I showed up right at 7:30AM overdue for a oil change and had to have my husband at work in Nashville by 9AM. Opening mechanic and manger were beyond friendly and got me in and on my way for my husband to make it work on time! What awesome people you have

"The environment was nice smelled very clean and ( Derrick & Stephen ) did a really good job period. The courtesy showed as well as respect, well was much appreciated. We needed a welcoming, courteous, and a place where you know the job was well done in our"

I will never go back, poor service and did things we said to not do yet.

My car needed some tlc and thanks to midas it got a lot in the whole day and a half they had it so thankful to the midas crew. Best believe you got me a 100% customer great service great crew.

My car needed some tlc and thanks to midas it got a lot in the whole day and a half they had it so thankful to the midas crew. Best believe you got me a 100% customer great service great crew.

"Scheduled appointment 9:00AM. I was told there would be and 1 1/2 hour wait because appointments were stacked. Take it or leave it attitude, I walked out. I can hardly wait for Firestone to be opened in *******."